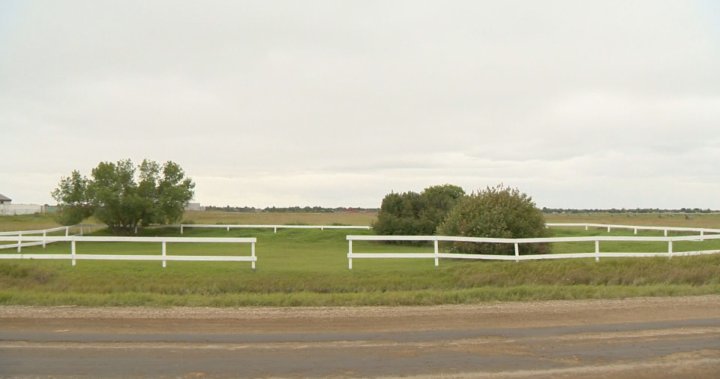 A fence surrounding the Regina Indian Industrial School (RIIS) cemetery is one of the only landmarks left at the site.

Inside this fence are around 35 anonymous graves of students who attended RIIS.

“We have a few names of students who died in the school, but we cannot say for sure that these are the students who are in the cemetery,” said Sarah Longman, President of the RIIS Commemorative Association.

The school operated just west of Regina, near Pinkie Road and the site of the Paul Dojack Youth Center from 1891 to 1910. Over the 19 years of the school’s existence, approximately 500 students attended. They were brought to school primarily from Saskatchewan, Manitoba and Alberta.

Over the past decade, the association has worked to identify anonymous graves and commemorate the site. The cemetery now serves as a provincial and municipal heritage site.

According to Longman, it is almost impossible to determine an exact number of burials due to the stacking of some graves on top of each other.

The association plans to survey the terrain with ground-penetrating radar for the third time to detect other unmarked graves in the area.

â€œA 10-kilometer radius could be something that we’re looking at because we don’t know,â€ Longman said.

â€œWe’re talking about 1890 here, that was a long time ago, so there are a lot of unanswered questions. “

The RIIS association is not the only group still looking for answers.

A total of 139 residential schools were identified in the Indian Residential Schools Settlement Agreement, although this does not include those run by provincial governments and those run only by religious orders, according to the Truth and Reconciliation Commission (TRC). . About 20 were in Saskatchewan.

As part of the TRC’s Calls to Action, the federal government announced $ 33.8 million over three years in its 2019 budget.

The remaining $ 27.1 million will be allocated to communities attempting to locate, commemorate and commemorate children who died in residential schools.

â€œCommunities will receive information today to access funding, which will be distributed urgently,â€ said Carolyn Bennett.

â€œWe will be there to support every community that wants to do this work. “

It is not known whether the RIIS Association will be able to access the funding since the cemetery is not located on federal land, Longman said.

However, she hopes this will speed up the process for survivors and descendants of residential schools seeking closure.

â€œThe longer it lasts and the longer it takes, we are losing critical information from the people who hold a lot of the knowledge that we need,â€ Longman said, adding that many local elders and survivors have passed away before the association could not discover the burial place. .

Terence Clark, associate professor and archaeologist at the University of Saskatchewan, is part of a team helping to develop a national strategy to uncover residential school burial sites.

They use ground-penetrating radar to detect â€œdifferent densities of objectsâ€ buried in the ground. However, the equipment cannot identify individual graves or skeletons.

â€œThe equipment isn’t perfect and the small, anonymous graves near the surface are really some of the hardest things to find,â€ said Clark.

“The technology is not there to ensure that every child buried is located.”

Clark, who helped Muskowekwan First Nation find anonymous graves at the site of the Muscowequan Indian Residential School, said they were working with survivors and community members to find out approximately where the burial site might be. .

“It’s a weird feeling when survivors come up to you and tell you that they buried a friend there and they are anxiously waiting while you do the job to see if it’s fair,” Clark said.

â€œThey want science to say, ‘That’s right. It really happened to them.

â€œThese angels, they wanted us to find them. They wanted to return with their families and nations to end their journey so that they could continue. “

Anyone experiencing pain or distress as a result of their residential school experience can access this 24-hour, toll-free, confidential Indian Residential Schools National Crisis Line at 1-866-925-4419.