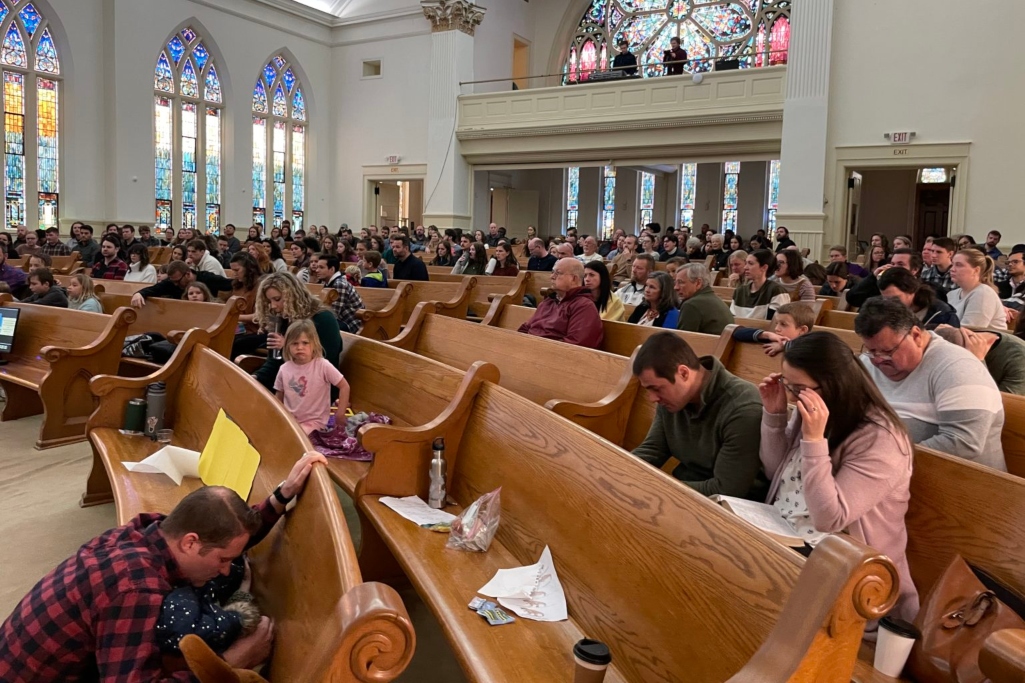 Several weeks after Russian forces occupied Snake Island in Ukraine on February 24, Slavic and Eleonora Braila knew they had to get their family out of the land they knew and loved.

“I was born in Odessa and we lived about 40 miles from Snake Island. When the missiles started flying over my head, I made the decision to take my family and leave,” Slavic said. “We left the company, our farm, our house, everything we had.”

So Slavic and Eleonora, along with their children Mark, 9, Melissa, 7, and Natansil (Nathan, 4), traveled to Romania on March 26, trusting God for all that lay ahead.

At the other end of the world, Stephen Gergi remembered his longtime friend, Slavic, who had led him to Christ many years before. From the same village in Ukraine, Stephen immigrated to the United States about 15 years ago, settling in Asheville. He contacted Slavic and offered to pay for the family’s relocation to the United States from Romania.

The family’s itinerary took them from their village of Ozerne, to Bucharest, Romania, then through France to Mexico. Their challenges were amplified by the fact that Mark is on the autism spectrum and the youngest child would soon be tested as well.

“It was a tough trip,” Slavic said. “The children were confused, but we constantly prayed for God to bless us and protect us.”

After arriving in Mexico, Slavic and Eleonora decided that contacting immigration officials at the border near San Diego made the most sense. But they feared the long wait faced by all applicants for immigration would be particularly difficult for Mark.

“I prayed for mercy and for God to speed up our journey,” Slavic said.

And He never did. Slavic contacted a volunteer at the border, explained their situation, and God intervened. Due to their special situation, the Brailas were given priority and were quickly allowed to enter California. In just three days, their friend Stephen secured their flights to Asheville, where they arrived on April 4, rejoicing in God’s provision and protection.

In Asheville, Liliya Chernous, a member of Reach Life Church, had worked on refugee resettlement for a long time. A refugee herself who immigrated to the United States from Ukraine 25 years ago, she is well known in the community for her translations in schools and medical facilities. Its resource network, which includes many churches, has helped many displaced people.

The Brailas’ need for housing was evident, and as inquiries were made, news came. Steve Harrisa regional mission catalyst for North Carolina Baptists.

“Norma Melton of the Buncombe Baptist Association told me that a family in Virginia who had inherited a house in Asheville wanted to make it available — rent-free — to help a Ukrainian family resettle,” Harris recalled. “I was able to connect this family with Reach Life Church member Liliya who has been at the forefront of ministry to the Ukrainian community.”

Chernous, knowing the Braila family, made the connection with the owners who offered a free six-month lease. Providentially, the house has a piano, which Mark, whose autism has made his experience of war displacement all the more upsetting, plays to calm himself. They were also lucky that their local school had a special program designed for children with autism.

“The local churches did what they had to do,” said Perry Brindley, associative mission strategist with Buncombe Association. By following God’s call to help the refugees, “they really mobilized. Our role is to support churches and families when we can. So when our churches take the lead, it makes us more effective in ministry.

Chernous believes Christians in America are well placed to reach out to refugees from Ukraine because of their shared cultural values.

“Ukrainians are strong people. They love freedom. They are very hospitable, ready to share with people in need. It’s in their DNA,” Chernous said.

She suggests asking new Ukrainian neighbors to participate in projects together, such as hiking, building and even Bible study.

“Listen to their stories, ask questions about their families and their country. But above all, bring them love.

“Slavic is a hardworking and loving father,” Chernous said, “but like any refugee family, they still need a lot of help.”

The Brailas are not the first Ukrainian family helped by members of the NC Baptist Church; more than 500 have served in the field in Ukraine since the start of the war.

“Being on a mission together is more than a slogan, whether it’s serving Ukrainians in Ukraine or being ready when they come next,” said the general manager-treasurer Todd Unzicker.

If you would like to contribute to the ongoing ministry of the Love Help Teach soup kitchen which feeds Roma children in Ukraine, you can do so at baptistsonmission.org/Donate.

(EDITORS NOTE – Marty Duren is a freelance writer and contributor to ncbaptist.org.)

Hoho calls for the dissolution of the Lotha Baptist Church Association –