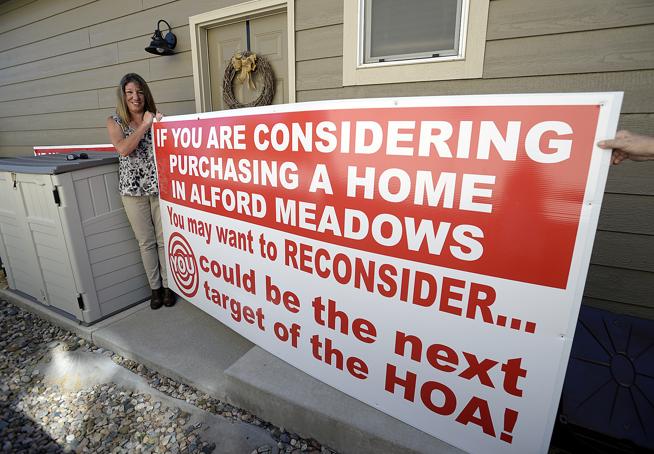 A Loveland man removed a controversial sign from his front yard on Thursday more than a month after he built the billboard to criticize his neighborhood homeowners association.

But Rich Stephens, the resident, did so with a promise from the Alford Meadows Community Association that they would never harass him again over a wooden pallet painted to look like an American colonial flag hanging from the side. from his house on the corner of West 50th Street. and Crabapple Drive.

When the HOA asked Stephens and his wife Colleen to remove their wooden flag, the couple stood their ground and erected the sign in their front yard, carrying the message “If you are thinking of buying a house in Alford Meadows, you might want to reconsider… You could be the HOA’s next target!

The association retained an attorney after the sign appeared and eventually filed a lawsuit against the Stephens that sought an injunction for the removal of the flag and sign.

Rich Stephens said about 200 people, including many neighbors, knocked on his door or approached him in his yard to offer support in his fight against the HOA.

A knock at the door came from Republican State House Representative Hugh McKean, who represents Loveland.

“I always support people’s private property rights. I think (Rich Stephens) was exercising them,” McKean said. “I always want to reach out to a citizen who feels like they have a hill to climb.”

The lawsuit against the Stephens was dismissed with prejudice Thursday after the couple’s attorney, Russell Sinnett, reached a settlement with HOA attorney Michael Krueger.

The agreement included a stipulation that the HOA would never again harass the couple about the Colonial Flag decoration if the sign were to fall.

Rich Stephens, a Vietnam veteran, removed the sign from his yard on Thursday morning before setting off on a hunting trip to Gunnison with his brother-in-law.

Rich and Colleen Stephens are both happy the dispute was resolved without going to court and are grateful to their supporters.

“I feel about 20 pounds lighter now that this is resolved,” said Colleen Stephens.

Several Denver-area television stations as well as The Washington Post reported on the appearance of the large sign in the yard after the initial Reporter-Herald story, and as the couple’s cause spread, more more visitors arrived at their homes to see the panel.

“I was afraid that people would come and ransack my parents’ house,” said Christine Wylie, the Stephens’ adult daughter.

Sinnett said state property owners are protected to hang American flags over objections from any association or group under Colorado’s revised law 38-33.3-106.5.

“Obviously when they filed the lawsuit they never called it a flag,” Sinnett said. “I just wanted to call the dog what it is and in my response I said we’re talking about an American flag here.”

Although the sign itself is a violation of HOA covenants, Sinnett said the lawsuit challenging it was untenable because HOAs are quasi-governmental agencies and the First Amendment protects the right to protest the actions of any group. .

“My opinion is that he had the right to put the flag on his house, and if it wasn’t for the flag issue, we wouldn’t have the sign issue,” Sinnett said. “I would like to say kudos to the HOA Board of Directors. There’s no big drama anymore, but it’s a big deal. I want to encourage everyone to be more open to discussion.

Soon the flag won’t even hang on the side of the house, as Colleen Stephens will replace it with Halloween decorations.

“I’m glad it fell, but I was planning how to decorate the panel,” Colleen Stephens said.