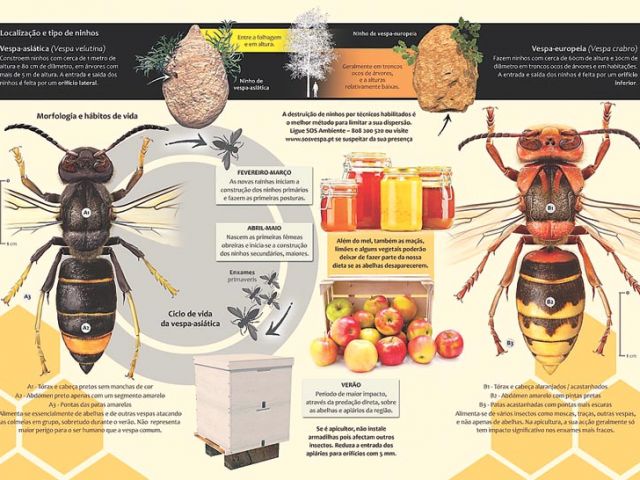 The environmental group Quercus has warned that the predatory Asian wasp is “out of control” in this country and has now spread to cities, including Porto. The group produced an invasive species leaflet to offer information and advice.

Quercus described the situation as “out of control” and causing 5 million losses per year to the honey industry.
Group chairman JoÃ£o Branco said there are now “several thousand” nests, which tend to colonize in cities and were initially limited to northern Portugal, but have gradually moved to the south and have recently been seen in the Alentejo and even the Algarve.
In a statement, Quercus said he had “lost the number of Asian hornet nests found in Portugal, but the number is already in the thousands”.
The association criticized an action plan presented by the Institute for the Conservation of Nature and Forests (ICNF) and the General Directorate of Food and Veterinary Medicine (DGAV) in January 2015, arguing that its results were “disappointing” and that “the plan failed across the country”. plank.”
Quercus stressed that the plan did not involve environmental associations as was suggested at the time, and underscored concerns about the Asian wasp’s “accelerating expansion” in urban environments, which “is already evident. in towns along the country’s northern coast, including Porto.
He called for a “new and energetic plan to monitor and fight against this invasive species, and this time include environmental protection associations as partners”.
The Asian hornet is listed as one of the 37 invasive alien species of concern to the EU.
It is estimated that the species could lead to a reduction in national honey production, leading to losses of around 5 million euros.
Other invasive alien insects also threaten Portugal’s economy and biodiversity, such as the fly Drosophila susukii, which attacks blueberries, strawberries, blackberries, raspberries and cherries, and the chestnut wasp, which already attacks framed chestnut trees in TrÃ¡s-os-Montes and the Beira.
EU estimates suggest that the annual economic impacts of invasive alien species amount to â‚¬ 12 billion across the European Union, and for Portugal that figure will exceed â‚¬ 250 million.